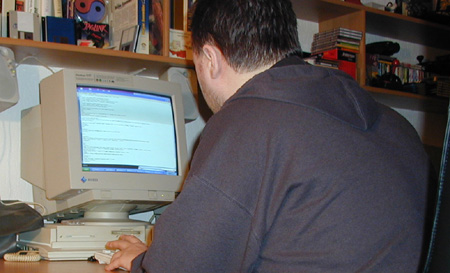 17.03.2022 OK it has been a really long time since I wrote anything here, but I have been constantly adding content here and there which I thought was not worthy a special mention. Big update this time is that the site is now https encrypted finally, and that I added new Blu-ray discs after an almost 6 year long hiatus.

06.07.2016 Added the new design to the Blu-ray/HD-DVD collection pages, and while doing so added a couple new discs as well. More additions to the site later this year.

02.03.2016 Finally managed to finish updating the Japanese LaserDisc collection. Added a couple new discs as well, check it out. It took a long time to get it all done :)

19.11.2015 I managed to finish a few sections of the LD Collection: - U.S. LD Collection, - Rest of the World, - LD Collection Complete List. Will work on the rest as time permits. Don't expect any fancy new design, I kept the old 2001 design for romantic purposes (and for being too lazy to retake all pictures).

1.11.2015 Now also updated the start-page with the new look, nobody can miss the updates anymore now :) Next to do is the LD Collection, but I presume this will take a loooong time, so don't expect it to happen in a week or so - just too much content to work on. But as you can see, the site is still alive :)

16.10.2015 And the newly designed Computer and Video-game corner is on-line now as well! Please check it out!

6.10.2015 In June I started taking pictures for the extensive update of the truck section, when I had the first big bunch done I started with the code for the new look - finally in October I am done and the big update is on-line. Approx. 1,500 (!) new pictures and tons of data added to the Truck Collection area, check it out.

22.3.2014 I finally managed to update the Truck-Collection area which I had originally planned to do since ages. So I hope someone enjoys some newly added pictures and a translation of the whole section to English language.

24.9.2013 The digital disc collection is now finished. All titles I've watched so far are added on-line. You can access my Blu-ray / DVD / HD-DVD collection through the "LaserDisc" area - More updates sooner or later :P

17.4.2013 OMFG it has been forever and then some... So yeah, I started with the BD/HD-DVD corner at some point, and got about half done, and then lost all motivation. Then I did nothing for a while, until my father bought an iPad. And I look at my LD collection on-line, and it looks all weird on that thing. So I started updating that section a bit to have it look good, and I got until 99% progress and then felt super lazy. So today I decided to go live with the 99% version and the half done digital disc collection, enjoy!

16.10.2011 I added some new Evangelion items in the Anime corner, and behind the scenes I have finally started to work on bringing my Blu-Ray and HD DVD collection on-line. It's still a long way to go though...

18.9.2011 So nothing happened and the world is still pretty much alive and kickin'... damn church-fags! I finally got around to watch all Bubblegum Crisis 2040 LD's, and thus it is now enough stuff to finally make a new LD update after its almost been a year to the day now. Enjoy!

21.5.2011 I think some small American church foretold the apocalypse for today... And thus I thought "let's update the website one last time before everything goes to hell" or something like that :P So yeah I added page 10 in the Truck-Collection section, and worked over the other 9 pages as well. The next LD update is progressing smoothly (currently 16 new discs, will prolly make it live when it hits 20/21 or so). And yeah whatever I guess. Nice weather outside, so I'm off to go BBQ. Cheers!

21.9.2010 Another 20+ LaserDiscs added including the giant Maison Ikkoku TV Box. This alone took over fifty pictures. So yes indeed this site ain't dead yet. Or I ain't dead yet if you like that better :P

26.5.2010 Yes updates are less frequent these days you could say... Main fault is I am being in total super lazy mode every day. Tho after I took some LD jacket pictures last night, which kept me awake till 3am, and then the neighbor started to built a carport at 8am but thats another story, erm, where was I? Yeah pics, I made em, I added 20+ new LD's today. Enjoy! Currently I am super busy digging myself through the Maison Ikkoku LD Box (24 disks). I was thinking about buying a new camera the other day, maybe that could motivate me to finally also update the truck corner, but then I kinda screwed the idea again. So maybe one day :)

15.8.2009 Another 20+ new Japanese LaserDiscs added to the collection. Nothing much else new. I feel so lazy these days. I want to do so much (irl and with the site) but I can't find the energy...

26.3.2009 Added some 30+ new LaserDiscs. Check out the 'Overview' list to easily find out which discs have been added lately. Also added a few new anime items couple days ago.

21.1.2009 After adding two new anime statues I thought I could do a little something. And so I added the 'Misc Stuff' section in the Anime/All the others... corner. Back with more soon.

30.7.2008 Okay I've been super extra lazy all over again, sorry for that. :P So today, while waiting for some furniture to get delivered, I decided to make a quick update and present you with 20 new LaserDiscs to be inspected thoroughly.

19.9.2007 Exactly 7 months later to the day... I took my time again :D Whats new? 40+ Japanese LaserDisc titles added. Will maybe do some more things these days. Or... well... maybe not. My laziness will probably hinder me well.

19.2.2007 Finally I sat down and gave the anime section a little work-over. The 'all the others' section became way too big for just one page, so I sorted the stuff into three categories, and added a couple new items as well. Also, 20+ new LaserDiscs added as well. Hope you'll enjoy it. Till next time :)

31.10.2006 Wow, after half a year I managed to do add another 20+ LaserDiscs I'm getting really lazy these days. I wanted to do all kinds of things, but... Well, maybe one day I can manage to get up from my lazy ass and do something. Until then, guess you are stuck with what you got :) Maybe later this year.

26.12.2005 Merry Christmas, and also a happy new year to all visitors! Again, I had to struggle hard to get over my laziness so I could finally bring you this LaserDisc update, including 30+ new additions. I hope you will like it, and I hope updates will be more fluent in 2006!

29.7.2005 Zomg it has been quite a while... any yes, I do still CARE! So I finally managed to get up from my lazy ass and do something... 36 new entries in the LaserDisc corner, a new picture on the title page and some other little additions here and there. Now back to beauty sleep...

16.12.2004 Finally the frame set is gone. Now you can enjoy a "pseudo" frame... changed a few other things here and there, added some new items here and there etc... I hope I made no mistakes. If you use Microsoft Internet Explorer, the Pop-up blocker will be a bitch. I also use some scripting in the LD corner, my advice would be to use Mozilla or whatever browser doesn't make a fuzz about some Java-script and "pop-ups". Will retake a lot of LD jacket pictures, when I can motivate myself.

21.11.2004 Moved the site to a different host, because traffic is starting to kill me, and it got expensive too... Hopefully this new provider will be as reliable as the old one. Only very minor changes on the site, some new LD entries, that's about it I guess...

1.9.2004 Quickly added the Arcade section to the Computer Stuff corner. Hope you will like it. Also hope it'll grow bigger...

3.8.2004 It was about time, almost four months of silence again. Now you can enjoy another LaserDisc update of 20+ titles. There will be more coming up in the future as I still have tons of unwatched stuff standing around. If I can manage to overcome my laziness I might also be doing something on the other sections again... On a side note, interestingly the document with the most hits for quite some time now has been the La Blue Girl EX LD Box! I wonder what kind of people are visiting my site? Heheh, oh well enjoy yourselves.

17.4.2004 Has been a while again... So now you can enjoy a LaserDisc update with 39 new entries, several box sets also. One or two new items also made it in the anime section. More updates later this year...:) On a side note, go to the cinema and watch "Dawn of the Dead", this is a must see movie. Cheers!

1.10.2003 After looking at this site with Netscape 6 and Mozilla I decided to give it a little face-lift and a work-over. Tell me if you find any errors or dead links, though I tested everything quite carefully with three browsers (the two mentioned before, and IE 6), Opera was not tested. Also non Windows browsers were not tried at all. Along the way come a few additions in the Truck-Collection corner, and two new LD Box sets have been added. I am looking forward to hearing your thoughts about the new look. And yes, one day I am going to remove this f**king frame...

27.8.2003 Been four months again...Okay here we go! Another LaserDisc Update giving you 30 new titles to look at. I am still quite busy with a bunch of other discs and box sets that I got standing around here, so prepare for more to come. Also cleaned up the links section a bit, take a look yourself. Updates on Computer and Truck section are delayed for a while longer, sorry!

26.4.2003 It's been nearly 10 months since the last Laserdisc update, and well what should I say-I did not manage to watch all discs until now (the busy man I am), so here you have a partial update which contains 40 plus titles. I have another 40 or so discs to go, so don't expect the next update soon...

2.7.2002 It's been quite a while...but now you can see several new Laserdiscs (see Overview table for details). Also several new items were added to the anime section! Also new items can be found at Truck Collection/WDV!

3.5.2002 A new Laserdisc update is done. Lotsa new titles especially for Anime fans...check it out!

27.01.2002 The next LaserDisc update is done! Lotsa new titles and several boxed-sets found their way to my place...so check out the "Overview" table to see what's new!

19.01.2002 Finally the links have been established. Plus some more background and bug hunting works done. Nine (9) LD's to watch until next update...

24.11.2001 LD: Sorry for the long delay, but the big problem is that I watch the LD's before I put them on-line, and that can take some time! So today I added eleven new titles, check the Overview table! Computer section has also made some progress, not finished by far but you can take a look for yourself...next update might take some time again.

29.9.2001 LD: Some new titles added, check out the "Overview" section. There will be no more notifications about new LD's added here! I'm working hard on the computer section, expect an update soon!

4.8.2001 LD: Finally the first big update is done. Over 200 photos and lotsa info has been added, and the "Japanese Laserdiscs" section is finished for now!